Aggression as Potential
Drama as Education
Using StorySacks for ELT 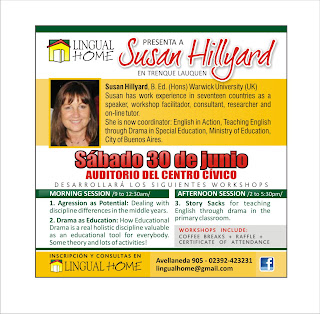 Poster for the workshop delivered in Cordoba:
Poster for "Get Real" in Cordoba 2012 for Trinity and ACPI

Another Brick in the Wall, la Pampa, Argentina

Another Brick in the Wall? A Question of Motivation and The Power of the Arts to Empower

for APPI and Trinity College London. These workshops carry "puntaje docente" and go under the umbrella heading of


The workshop for Trinity and APPI in La Pampa, on Saturday June 2nd 2012 attracted about 70 participants who stayed the course, literally! They were a bunch of extremely knowledgeable teachers or student teachers who were happy to participate a in every activity. We spent an extremely productive six hours on both theory and practice. Just waiting now for the Evaluations to come rolling in for me to have some new bedtime reading!

Thanks to Trinity and APPI for such superb organisation and for a lovely welcome.


A 4 week course for Secondary ELTeachers in Yunnan province for the British Council and the Ministry of Education China, Partners. 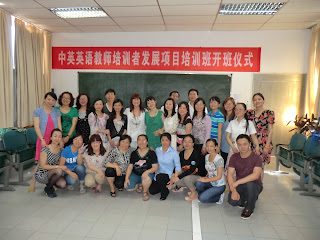